Leica recently introduced the Monovid monocular. Monoculars are more compact than binoculars, but you lose stereo vision, which is why birdwatchers tend to shun them. I myself have a very strong director eye and correspondingly poor binocular vision, so this is not such a big deal for me. 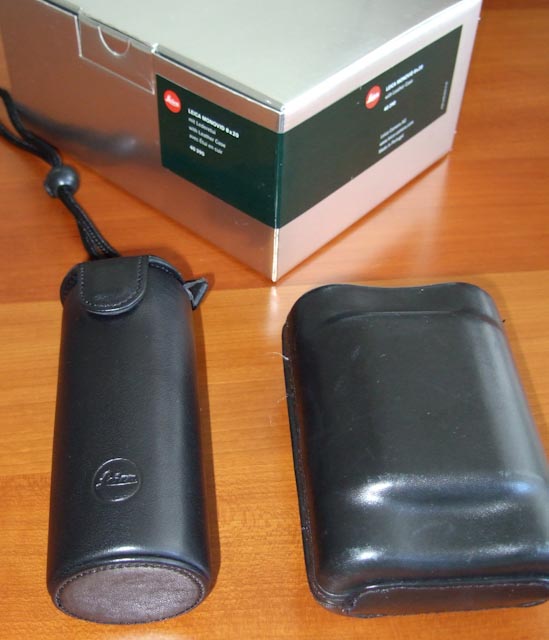 The Monovid is supplied with an accessory screw-on close-up lens that reduces the minimum focus distance. This is useful for butterfly or hummingbird watchers, but the arrangement is clumsier than the (admittedly much larger) Minox Makroskop. 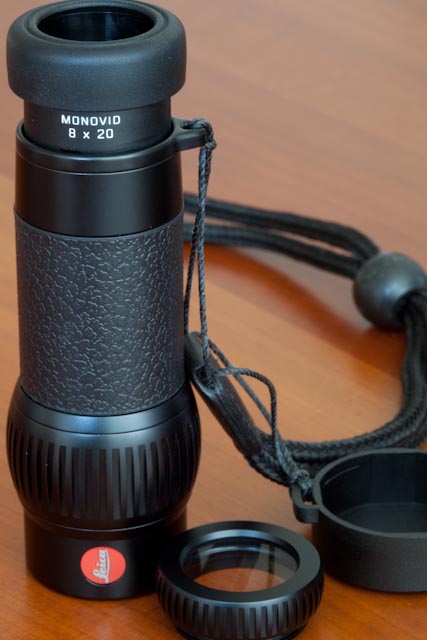 The Monovid is essentially half of a pair of Ultravid 8×20 BL binoculars. The barrel is 3-4mm longer to accommodate the threads for the close-up lens, and it has a goiter-like knurled protrusion towards the end for focusing. The eyecup is the same, and can be either pulled out for normal viewing, or left in for eyeglass wearers. This is a far better arrangement than fold-up rubber eyecups. The leather case for the Monovid is quite bulky, and features a screw thread to hold the close-up lens as well as an ingenious ribbon that pulls the monocular out of the case when you flip the lid open. It also has a magnetic catch unlike the Ultravids’ snap button. 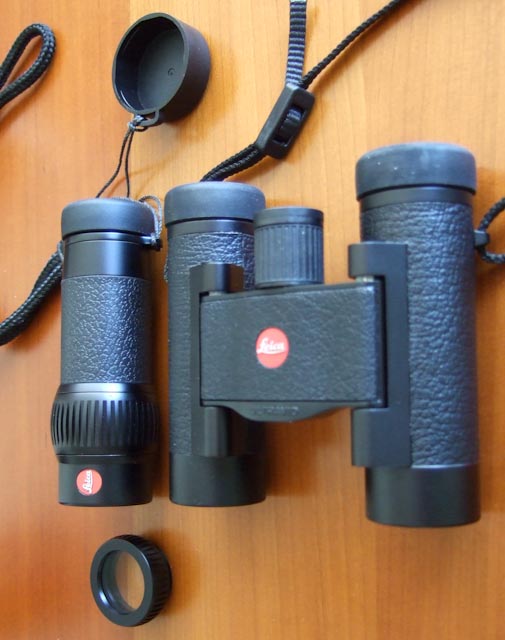 Unsurprisingly, the performance is nearly identical, that is to say, stellar. The image is bright (most monoculars are in the 12-15mm aperture range). There is no hint of distortion or chromatic aberration across the field. It is quite sensitive to perfectly centered eye placement, specially when you are wearing eyeglasses, otherwise you will black out.

Sadly, the price is not half that of the binoculars, closer to two thirds. Considering that it is not all that much more compact and you lose stereo vision, if you are considering one, I would recommend the more versatile Ultravid 8×20 BL (or the cheaper BR) instead. Another option to consider is the respected line of Zeiss monoculars (most are more compact than the Monovid, but the 8×20 is nearly the same size and not as well built) or the slower but smaller Nikon “high grade” monocular series (unfortunately the 7×15 has been discontinued, but old new stock is still readily available).

I purchased a new-old-stock Nikon High Grade 5×15 monocular. It is much lighter than the Monovid, has much closer focusing at 60cm vs 1.80m, no futzing with accessory lenses required (although to be fair the Leica focuses to 25-30cm with the close-up lens).

The fit and finish on the Japanese-made monoculars (vs. Portugal, not Germany, for the Monovid) is superb, with deeply engraved and paint-filled markings (even superior in execution to AI-s Nikkors). The supplied case is made of genuine leather, unfortunately it does not include a belt clip. The aluminium shell is not monocoque like the Monovid, and seems less robust. There is also no mention of the Nikon being nitrogen-purged and waterproof. The finger indents make it quite comfortable to hold and the hexagonal cross-section means it is unlikely to roll off a table. The neck strap on the Nikon is also lighter and far more practical than the bulky hand strap on the Leica. Surprisingly, it is not easier to hand-hold despite the lower magnification – the heft of the Monovid stabilizes it somewhat against shake.

The optics are excellent. It’s hard to compare to the Leica, due to the lower magnification and aperture, but like the Leica, the image is clear across the frame with no color aberrations across the frame. There seems to be some slight chromatic aberration at the very edges that you don’t get with the Leica.

The Nikon 5×15 HG is discontinued, but it appears in their 2012-2013 sports optics catalog, along with the 7×15 HG, so there is a possibility it will be resurrected. It is readily available from Japan on eBay and occasionally Amazon as well.

I seem to be collecting monoculars. Some other models: