I have been an Amazon Prime customer since it was introduced, almost a decade ago in 2005. They recently raised the price to $99, which is not unreasonable given inflation and the rise of fuel and shipping costs. Unfortunately, the service has also degraded, and I am considering dropping it for that reason.

It really hit me this week. I ordered a bunch of loupes from eBay last weekend, as Schneider stopped manufacturing them 2 years ago and they are now officially listed as discontinued, and old-new stock of other reputable makers like Leica, Cabin/Mamiya or Rodenstock are starting to dwindle. At the same time, I ordered a few items using Amazon Prime (5 orders in all, 3 from Amazon themselves, 2 from third-party vendors but fulfilled by Amazon). All my eBay items have already arrived, including some shipped all the way from Canada that arrived yesterday, but only one of the Amazon items has arrived. Something is seriously wrong when Amazon’s vaunted logistics cannot match individual sellers on the fleabay.

The problem cannot be laid at the door of the shipping companies, the problem is that Amazon is taking longer to ship the items in the first place. It is an open question whether that delay is intentional (as seems to be the case for Amazon free super shipping orders, or when Netflix delays heavy customers’ DVDs to rate-limit them and thus reduce its shipping costs).

One other factor that has decreased the value of the service is the increasing proportion of items that are part of Amazon’s obnoxious add-on item program. Contrary to Amazon’s statements, many of the items downgraded to add-on status are not ones that were unavailable previously, but rather items that were previously eligible for Prime but no longer are. If I have to accumulate $25 in orders, I might as well go back to the free super saver shipping.

To sweeten the sticker shock, Amazon is bundling streaming video and music, and the Kindle lending library. Those services have essentially zero value for me, as the movie selection is as dismal as Netflix’s (mostly C-list or really old movies, hardly anything you might want to watch), streaming does not have good classical music coverage, and I refuse to use Kindle due to their predatory practices.

I find I am buying considerably less from Amazon these days:

I used Amazon’s handy order history export (temperamental, it fails if you have Amazon Honor System transactions in the selected date range) to calculate how much I spend with them (removing Adorama as they are a big outlier), and the trend is clearly unfavorable to Amazon since the high water mark of 2011. Their changes to Prime (pay more for worse service) are certainly not helping. 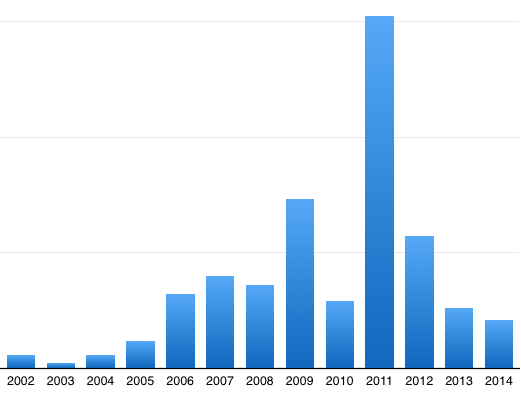